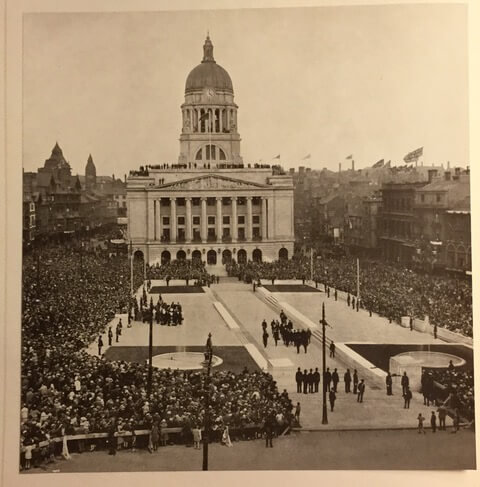 Sits in the city centre. The magnificent 200 feet high dome is the centrepiece of this building and can be seen over the skyline of the Old Market square.

Market Square is one of the largest and oldest squares in the country and folklore have us believe that it is where Robin Hood won the converted silver arrow contest converted by the sheriff of Nottingham. It is literally surround by an uncanny number of haunted hostelries and shops. There must be a reason for the condensed paranormal activity in this area.

Today the council house is used as the coroner court and some civil ceremonies. Seen by thousands of people, however very few have been inside let alone been given permission to carry out a paranormal investigation.

Guest must be over 18 years old to attend this event.

The building replaces the original Exchange Hall, which had been built in this site in 1726. So whilst almost 100 years old we cannot exclude what lies beneath.

Completed in 1929 the council house preside over the Old Market Square in Nottingham, its keystone over the entrance salvaged from the Great Fire of London in 1666

The building is guarded by two white loins, most notably a popular meeting place for the people of Nottingham. Beyond the entrance and staircase you will have access to three further floors comprising of the Ballroom Lord Mayors suite, sheriffs parlour and the council chamber plus many more rooms

Upon entering the building you are faced with the grand sweeping marble staircase, first impression was of a spirit waiting for us ‘not expecting us’ would probably  be a better description! Their presence was later picked upon again on the upper floors.

Our host took us along to the Council Chamber, a semi circular room. Upon entering our medium was taken a back by a strong intimidating male presence, definitely not residual!!

There are so many rooms, activity was also picked up along the corridors and what would have been the back service areas.

Staff shared some of their experiences which tallied with the areas we experienced ourselves. There is so much to explore on this first investigation of this kind.