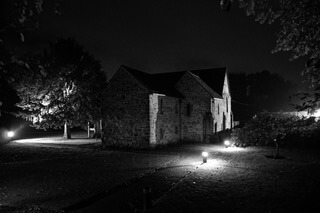 Join us in one of the oldest houses in Leicestershire. Also known as Donington Le Heath Manor House, and the 1620’s. Dating back to 1290!

With centuries of history and many families who have considered this beautiful house their home, it is well worth a visit… but after dark, this place has a different atmosphere.

Whose spirits reside here?  What was their connection to this amazing building?

Is it Sir John Digby? Once owned manor, he fought for Henry Tudor against King Richard III at the Battle of Bosworth which took place just a few miles down the road.

The most famous Digby family member was Sir Everard Digby, who was hung, drawn and quartered for his part in the conspiracy to kidnap Princess Elizabeth from Coombe Abbey following the intended blowing up of King James and Parliament in the Gunpowder Plot (1605).

Have you noticed the graffiti on the stone and timber work outside? NO!

It was probably during the Digby era that the graffiti appeared. It was designed to protect the manor and its inhabitants from evil spirits. Among these apotropaic marks are deliberate taper burns on the doorways, used to stop evil spirits passing through them. Supposedly having the power to avert evil influences or bad luck.

From 1670, it was left to a charitable trust who rented the land and buildings.  A number of families were residents here over the years…

So what spirits continue to reside in their family home?

But, be aware, as you walk through the door, you can feel the spiritual engery step forward. Come and wander through the chillingly empty rooms and soak up the atmosphere of this once busy home.  It takes on a whole new feel when darkness falls…

Who still haunts this amazing place and whose ghosts have been seen here?

Join us on our ghost hunt and see who you will encounter?

Come and join us for an experience you will not forget at this magnificent family home, be a part of discovering the families who once considered the house their home.  You may even encounter the odd ghostly farm animal wondering around… why you may ask?…Well you will have to join us to find out!!

Why does our team rank this venue top of their list?

This venue NEVER fails to deliver… even our guests come back time and time again. We have witnessed dark shadows, voices, faces at the window and noises from the upper floor when no one was there?

Check out our past events page and gallery to see information and photos from previous investigations here!

Come and visit this magnificent manor house in the day. Donington Manor

Why not check out our other paranormal investigations in the area. Haunted School House

It is believed that Robert De Herle bought the land and had the house built between 1258 & 1295.

For nearly 700 years the house remained a family dwelling.

In the early part of the 16th century, the house was modernised and it was around this period the house may have been owned by the Digby family, who were caught up in the War of the Roses and the Battle at Bosworth.

And as history tells us, Sir Everard Digby achieved notoriety as one of the conspirators in the Gunpowder Plot in 1605; as an associate of Guy Fawkes.  His crimes would see him meet a ghastly demise.

The house was let to several families over the years and as there was no money to renovate, many of the original features from the past remain.

With so much history and so many families who once lived here, there is no question that Donington Le Heath 1620’s Manor House is haunted!

There have been many ghost sightings, housemaids and children have been seen flitting about the kitchen and bedrooms by staff and members of the public.

During one of our investigations the appearance of a 17th century tall man wearing a brimmed hat was seen, thought to be the shades of Sir Everard Digby.

Evidence suggest that the bed which resides here at the manor house is from the White Board Inn, Leicester. It is strongly believed that this was the bed that Richard III spent his last night in before making his way to the Battle of Bosworth in 1485.

During one of our events we captured our famous EVP (electronic voice phenomenon).

Our EVP hit headline news across the world! You can hear this recording by clicking here

On our last investigation, one of guests reported to feeling cold around their shoulders.  Our thermal imaging camera shows this guest with that exact cold spot around them … and on the next photo, the cold had moved all the way around their neck?  What or who was making this guest feel this cold?  What do YOU think??  Check out the photos in our gallery!