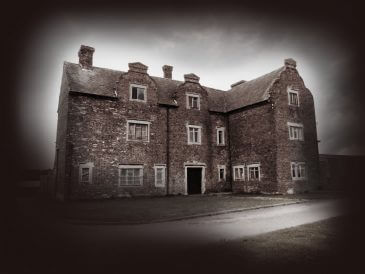 Our Ghost Hunt at the amazing Gresley Old Hall.

Paranormal Investigators have been flocking to Gresley for many years and for good reason.

This building dates back to around 1556 and was built for Sir Christopher Alleyn.  The materials used to construct this beautiful building were those of the demolished Gresley Priory which reputedly stood on this site.

Does Sir Christopher still reside here?  Are there any spirits of the monks from the original priory?

Gresley Old Hall has a notoriously spooky atmosphere, with creaky floorboards, winding staircases and long, dark, unforgotten rooms.  This location will not leave you disappointed.

This is one of the oldest buildings in South Derbyshire and must have many a secret to tell… and as one of the most haunted buildings in England, it is ideal for a paranormal investigation!

So why not join us on our ghost hunt at Gresley Old Hall?  Experience the historical significance of this stunning house for yourself!

What spirits will you encounter and who still haunts the Old Hall at Gresley?

Use our paranormal investigating equipment to help you to uncover the mysteries of the ghosts of Gresley.

Not convinced yet? Check out our past events page and gallery to see information and photos from previous investigations here!

If you like this one, why not check out our other paranormal investigations. Ghost Investigation – Wollaton Hall   Halloween! Ghost Hunt Newstead Abbey

The History of Gresley Old Hall

In the mid 18th century the house had an estate of 600 acres and was set in a fenced park, but in 1789 the house was said to be ‘hastening fast to decay’ and the property was subsequently dismembered for coal mining, the house tenanted as a farm and the outbuildings converted for use as a pottery in 1794. In 1895, when the mining had destroyed too much of the estate for farming to be viable, it was converted into tenements. It then lay derelict for some time before being purchased by a Miners’ Welfare club, which employed Vernon Brice ARIBA to make it habitable in 1953. The house now stands in a remnant of the former park, once again derelict!

On our last investigation, Gill felt the presence of a spirit who was making her feel cold.  Our thermal imagining camera detected that her whole body was cold (shown in blue) and the guest standing next to her was warm (shown in red)…

So what OR WHO was making Gill so cold??  Check out the gallery to see those pictures?  What do YOU think??