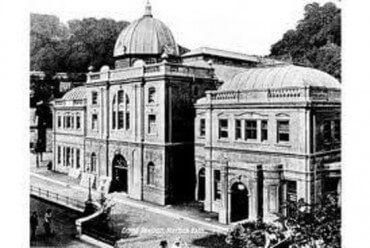 Built in 1910 this venue is an iconic venue affectionally referred to as the Pav, is a fantastic building to investigate and we believe very haunted.

It is a large venue; the dance hall will take your breath away whilst the back stage area will give you the feeling you are being followed.
Guests must be aged 18 years and over to attend this event.

EVENT INCLUDES:
Use of ghost hunting equipment including EMF Meters, K2 Meters ect. Experiments including glass divination, table tipping and Ouija boards. Ghost hunting vigils and seances.
Refreshments will be served throughout the evening. This venue is not suitable for people with mobility issues or walking difficulties

1849 the railway arrived in Matlock bringing with it a new trade in tourism.  The Grand Pavilion was built 1910 on the site of the former stables and blacksmith yard next to the river Derwent.  Its aim to host entertainment and events for the masses.

Within a few years of opening First World War soldiers were billeted on site. They also spent time here recuperating from injuries

Theatres are renowned for their hauntings.

The Pav is no exception. Two workmen were killed during its construction and are said to be the cause of the poltergeist activity in the Dome.

Heavy breathing, footsteps, children giggling, a malevolent spirit and apparitions have also been reported throughout the venue.

Names are coming through and information is being researched and checked by the Matlock Pavilion Team for verification. DO NOT MISS THIS ONE!