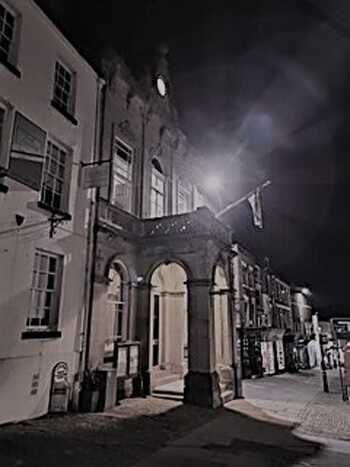 Paranormal Investigators have been flocking to the Ashbourne Town Hall for many years and for good reason.

Built in 1861 the town hall is a fine example of one of the few Victorian buildings in existence in the town. Formerly the site of the old Talbot Inn, a public house which dated back at least to the early 17th century

Who still resides here?  Are there any spirits of the former inn still hanging around?

Although the inn was largely demolished in the mid-19th century, the basement remained in situ when the current building was erected.

The Town Hall has a notoriously spooky atmosphere, with creaky floorboards, winding staircases and long, dark, unforgotten rooms.  This location will not leave you disappointed.

In November 1930, while a fire bell in the building was being rung to summon the fire engine which was located in a yard on the west side of the Market Place, a heavy bar fell from the bell mechanism killing a member of staff, Tom Fearn. Does Tom still ring the bell?

So why not join us on our ghost hunt at Ashbourne Town Hall?  Experience the historical significance of this stunning hall for yourself!

What spirits will you encounter and who still haunts the Town Hall at Ashbourne?

Formerly the site of the old Talbot Inn

Built in 1861 it is a fine example of one of the few Victorian buildings still in existence in the town.

This will be the first ever paranormal investigation at this venue for Haunted Heritage. On our walk round our medium felt she was being followed around the site by a gentlemen wearing a shining medals around his neck… who is this?

Staff have encountered seeing the shadows along the balcony, footsteps when no one is there? and conversations being overheard in the main ball room, who are these spirits.