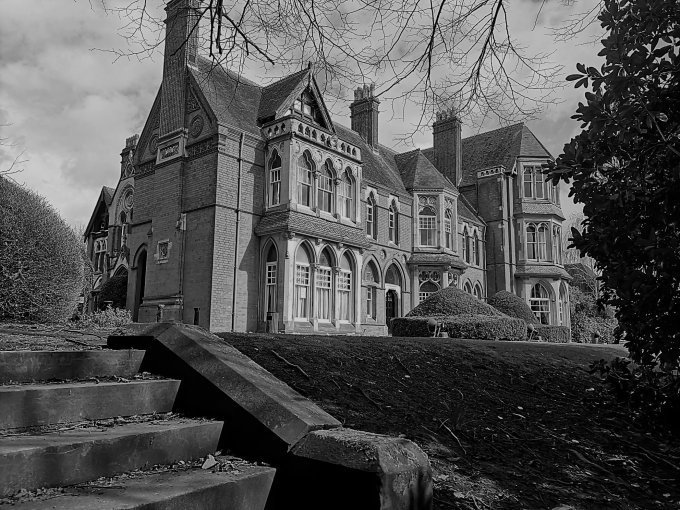 The Rt. Hon. Joseph Chamberlain, MP for the Birmingham area, commissioned this beautiful house in 1878.    This was his  family home and residence in Birmingham which he aptly named Highbury Hall after the area of London where he grew up as a child.

Whose spirits have been seen and heard here?

Over the years, many people who have worked at the house have reported seeing ghostly apparitions, have heard voices, crying,  footsteps and unexplained knocking sounds.   One in particular has been the sight of a lady and a child walking the grounds.

People also often get the sense that they are being watched or followed around the house, making them feel nervous or uncomfortable.

Will you experience any of these paranormal activities?

Who will you encounter on your paranormal investigation here?

Joseph Chamberlain lived at Highbury Hall from 1880 until his death in 1914.   Does Joseph still haunt his family home?

According to census records, Joseph and his family had numerous servants.  Do any of them reside at this magnificent house?  Will you find out their names?

During World War I, Highbury Hall was used as a hospital annex and home for disabled soldiers.  It later became a home for elderly women in 1932.

There is so much history here and so much that we don’t know about so we hope our investigation will give us some great information to research … that’s why we need you!

Why not come along?

Come along and see who and what you will discover!  Whatever you uncover will allow us to research the history of this amazing location and the people that once resided here.

If you like this one, you may also want to view our other investigations in the area: Ghost Hunt –Selly Manor

History. Yew Tree (Highbury Hall) was built in 1878-9 for the MP Joseph Chamberlain. From 1888, Highbury was the setting for large social and political gatherings. The greater part of Highbury’s grounds was made a public park soon after 1932.

Highbury ceased to be a family home after Joseph Chamberlain’s death in 1914 and in May 1915 it became an Auxiliary Hospital for treating wounded soldiers, particularly orthopaedic cases.

During World War I, Highbury Hall was used as a hospital annex and home for disabled soldiers. It was given to trustees in 1919 by his elder son, Austen Chamberlain, and it then passed to the Corporation of Birmingham in 1932, when it was used as a home for elderly women.

On our first visit whist being shown around our medium was very much taken back by a male presence in the attic area, so shocked by his presence she stumbled backwards to move out of the way!

Our first paranormal investigation did not disappoint! Amazing pictures caught on camera, doors shutting on their own , we just cant wait to go back!

Many staff have lots of stories to tell of seeing uniformed soldiers wondering around the hall. Whispering has also been heard in the corridors, who might these people be? there is only one way to find out.. that is you dare!